Table of Contents show
How Did Birthstones Originate?
Ancient India
Ancient Egypt
Why Do People Wear Birthstones?
What Are the Benefits of Wearing Birthstones?
Help Improve Your Health and Well-Being
Attract Good Luck and Positive Energy
Protect You from Harm
Enhance Your Natural Beauty
To Represent Your Birth Month
Great Way to Show Your Personality
Birthstones by Month
January
February
March
April
May
June
July
August
September
October
November
December

Birthstones are gemstones that are associated with particular months of the year. They have been used for centuries as talismans and amulets, and people believe that they can bring good luck and protect against evil. Some people also believe that birthstones can help to improve your health and well-being.

How Did Birthstones Originate?

The modern use of birthstones can be traced back to the 1500s, when people believed that gemstones held mystical powers. Each month was associated with a different gemstone, and people wore these stones in the hope of gaining its benefits. The tradition of wearing birthstones was passed down from generation to generation, and it is still popular today.

The 12 birthstones we know and love today originate from Ancient India. They were documented in a Sanskrit text known as the Brihat Samhita, which was written in the 6th century.

The text contains a list of astrological gemstones and their corresponding months. It’s said that the gems were assigned to months based on their healing properties and how they could improve people’s lives.

Many people believe that birthstones originate from ancient Egypt. This is because there are records of Egyptians wearing colorful stones around their necks and wrists to signify different months of the year.

In fact, the tradition of wearing birthstones is thought to date back to the Bible. There are references to gemstones being worn by biblical characters including Aaron, who was said to have worn a breastplate with 12 different gems corresponding to the 12 tribes of Israel.

Why Do People Wear Birthstones?

People wear birthstones for many reasons. Some believe that the gemstone brings good luck, while others wear it for protection. Some people believe that different gemstones correspond with different months of the year and offer special properties to those born in those months. For example, people born in January are believed to be strengthened by the garnet, while those born in November are said to benefit from the use of topaz.

What Are the Benefits of Wearing Birthstones?

The practice of wearing birthstones is said to date back to the 12th century, when people believed that each gemstone had a specific power to protect and heal its wearer. While the powers attributed to different gems have since been debunked, there are still many benefits to wearing birthstones. Here are six reasons why you should consider wearing a birthstone:

Help Improve Your Health and Well-Being

Almost everyone knows what their birthstone is, but not many people know the benefits of wearing them. Birthstones are said to help improve your health and well-being in a number of ways.

Each birthstone is said to possess its own unique properties that can benefit your health. For example, wearing a ruby can help to increase your vitality and strength, while wearing an amethyst can help to promote inner peace and relaxation.

There is something about birthstones that just seems to attract good luck and positive energy. Perhaps it is because they are associated with such a special moment in a person’s life – their birth. Or maybe it is because they have been thought to have healing properties for centuries.

Whatever the reason, many people believe that wearing their birthstone can help bring them good luck and positive energy. Some even believe that the gemstones can help protect them from negative energy and harmful influences.

Protect You from Harm

Birthstones are associated with specific months and are thought to offer protection from harm during that month. For example, wearing a ruby during July is thought to protect against injury.

One’s natural beauty can be enhanced through the use of birthstones, which are said to have metaphysical and healing properties. Birthstones can be worn as jewelry, or simply kept in a pocket or purse.

According to gemstone folklore, different stones correspond to different months of the year, and each stone is thought to bring its wearer a particular type of benefit.

To Represent Your Birth Month

Great Way to Show Your Personality

Birthstones is a great way to show your personality because they are unique and personalized to you. They are a physical representation of your month of birth, and each one has a different meaning and story behind it.

You can choose any birthstone you want, regardless of your month of birth, and they come in a variety of shapes and colors. Birthstones are also a great way to commemorate important moments in your life, such as births, weddings, and anniversaries. 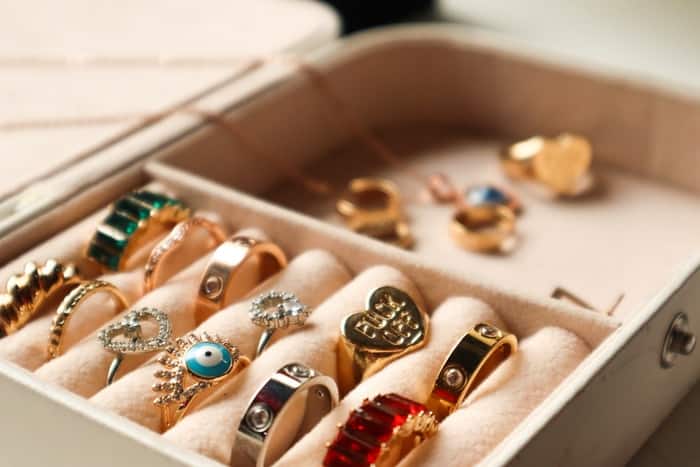 The birthstone for January is Garnet. It is a deep red gemstone that is said to bring good luck and protect its wearer from harm. It has been used as a talisman for centuries, and is still popular today. Garnet can be found in a variety of colors, but the most popular is the deep red variety. It is often used in jewelry, and makes a beautiful addition to any collection.

February is the month of love and amethyst, the birthstone of February, is a perfect symbol of it. Amethyst has been prized for centuries for its beautiful color and spiritual properties. It is said to promote peace, serenity, and calmness, making it a perfect stone for those who are looking to add a touch of romance to their lives. Amethyst is also associated with creativity, passion, and commitment, making it the perfect choice for couples celebrating their anniversary in February.

Aquamarine is the birthstone of March, and it is a beautiful stone with a range of colors from light blue to deep blue. It is often associated with the ocean, and some people believe that it can help promote peace and serenity. Aquamarine is also said to be a protective stone, providing defense against harm.

April is typically associated with the diamond, which is the birthstone for that month. Diamonds are a symbol of enduring love and are often given as engagement rings. They are also used in other jewelry, such as necklaces and earrings.

Emerald is the birthstone for May and is associated with good luck, love, and happiness. Legend has it that wearing an emerald will bring the wearer wealth and success. Emeralds are mined in Columbia, Zambia, Zimbabwe, and other parts of Africa. The most valuable emeralds come from the Muzo Mine in Columbia.

Pearl is the birthstone of June. Pearls are said to promote faith, charity, and chastity. They are also thought to bring success in business and protect against bodily harm. Pearls are often given as a symbol of commitment and as an expression of love.

The birthstone for July is ruby. Rubies are one of the most valuable gemstones, and they come in a variety of colors from pale pink to deep red. They get their name from the Latin word “rubens,” which means “red.” Rubies are found all over the world, but the most valuable ones come from Burma. They can be worn in rings, necklaces, earrings, or bracelets.

August’s birthstone is peridot. This gemstone comes in a range of colors, from light yellow to olive green. Peridot is found in volcanic rocks and has been used as a gemstone for thousands of years. The ancient Egyptians called it the “gem of the sun.”

Sapphire is the birthstone for September. It is a gemstone that is typically blue, but it can also be found in other colors such as pink, yellow, and white. Sapphires are considered to be one of the most valuable gemstones, and they are often used in jewelry. They are also sometimes used in watches and other electronics. Sapphires have a long history and have been used by many different cultures.

The birthstone for October is opal. Opals come in many colors, but the most common is called “white opal.” White opals are usually translucent, with a milky appearance. Other types of opals include black opal (the most valuable), fire opal (a bright orange-red), and water opal (a pale blue or green).

Opals are found in several parts of the world, including Australia, Mexico, and the United States. They are formed when rainwater dissolves silica from quartz rocks and then deposits it in cracks and cavities in the rocks. Over time, the water evaporates and leaves behind these small spheres of silica that we call “opal.”

The birthstone for November is topaz. It is a beautiful stone that can be found in a variety of colors, including blue, yellow, pink, and brown. Topaz is believed to be a protective stone that can bring good luck and happiness to its wearer. It is also thought to promote creativity and boost the immune system.

Turquoise is the birthstone for December. It is a blue-green gemstone that is found in many parts of the world. Turquoise has been used for jewelry and other decorative items for centuries. The color of turquoise can vary, depending on the type of mineral that it is made from. Some people believe that turquoise has healing powers and can protect against negative energy.